Why was the Living Water partnership established?

When Fonterra and the Department of Conservation (DOC) formed a partnership in 2013 it was the first national partnership of its type in New Zealand - between a government conservation agency and a primary industry cooperative - and emerged at a time of growing national concern about the impact of dairy farming on water quality.

For Fonterra, water quality was an organisational priority and they were party to the establishment of the Dairying and Clean Streams Accord in 2003, but realised complementing their on-farm work with expertise in freshwater science and ecology would accelerate water quality improvements.

DOC as a national organisation with high public awareness was a natural choice of partner. Forming a partnership with Fonterra was part of a wider shift by DOC to have more partnerships, particularly in the business community.

How was the partnership set up?

A formal agreement between DOC and Fonterra to create a 10-year national partnership was signed in March 2013. Under the ‘Community Investment in Water’ Partnership Agreement (renamed Living Water) Fonterra committed $20 million over 10 years (to 30 June 2023) for projects that DOC would manage. DOC’s commitment would amount to approximately $500,000 per year in staff time.

What were the challenges of establishing a partnership?

With an agreement signed and funding in place, expectations were high that Living Water could immediately deliver results on the ground. However, while senior staff from both organisations were committed to the programme, there were no initial operational plans to guide delivery in the five selected catchments. The partnership managers in each organisation had to spend much of the first 18 months developing these plans, which resulted in budget underspends and slow progress in delivering partnership outcomes. Nor was there any detailed plan for how staff from the organisations would work together in the partnership.

The substantial sums being invested by Fonterra (approximately $2 million per annum) placed pressure on the partnership to demonstrate to shareholders farmers' value for their investment. This meant in the early years, at an operational level, the relationship between the two organisations more closely resembled a sponsorship arrangement, without a clear outline of what was being sponsored. The bulk of the work occurred on public conservation land, rather than a partnership with work on and off farm.

This was confusing for staff who had been advised they would be working in a partnership, when on the ground there was little if any integration between teams. In addition, catchment-based staff were isolated from a national perspective without any guidance on how their work aligned with the high-level vision and objectives. Integration between staff was further restricted by each organisation using different IT platforms and business processes, with simple things like sharing documents being surprisingly difficult. Two years into the 10-year partnership it was agreed to review the programme and operation of the partnership.

What did the partners learn from establishing a partnership?

The review of the partnership in 2015 identified a number of issues and challenges. A key finding of the review was that in the excitement to implement the partnership, the strategy development step had been missed out, and along with a programme of mutually agreed goals and outcomes. Involving people with different expertise from each organisation in the strategic development of the programme would make a shared purpose more visible and compelling and achieve greater buy-in across both DOC and Fonterra.

A comprehensive strategy development process was implemented in 2016 that resulted in a new national strategic direction and operating model for the Living Water partnership and programme. Briefly summarised, the strategic intent for Living Water is to work in partnership to co-design and trial solutions to improve freshwater ecosystems and accelerate sustainable farming. The partnerships approach was applied both internally and externally. Internally Living Water wanted to ensure staff from both partners, DOC and Fonterra, were able to work together in a true partnership sharing knowledge and expertise, and engaging jointly in trials and catchment-based projects. Externally Living Water wanted to engage with mana whenua and local organisations in each of the catchments where trials were being held.

One of the first tasks following the setting of the new strategic direction in 2016 was developing a monitoring and evaluation framework. Measuring the organisational performance, in addition to the outcomes of trials, ensures the role of the organisation and partners is also understood, as the degree of participant buy-in can be critical to the success of a project.

Through 2017 a strategic planning process was used to involve Living Water teams and key stakeholders in developing implementation strategies and annual work programmes for the five Living Water catchments.

As part of the strategic refresh of the programme, a ‘Telling our Story’ strategy and narrative was developed that addressed both internal and external communications requirements. The new narrative clearly stated the focus of the partnership, which is trialling and proving practical solutions to freshwater issues that can be used regionally and nationally, rather than restoring whole catchments.

What’s been achieved by the partnership?

By the end of the 2021 financial year, Living Water had achieved much of what it had set out to do.

Working across 35,000 hectares in five catchments, Living Water had engaged 72% of farmers in the catchments, with 48% of farmers implementing freshwater improvement activities on their own land that went beyond regulatory requirements. This was in addition to the work being undertaken on crown-owned and DOC-managed land within each catchment.

Living Water formed partnerships with over 52 groups and organisations, and partnered on projects funded to continue beyond the end of the formal partnership. Of 64 projects underway or completed, 10 were directly building iwi and hapū capacity and capability, and 12 had integrated Mātauranga Māori. Living Water had conducted 36 trials of solutions to improve freshwater quality and 9 proven solutions were already being used by other organisations. This includes on-farm tools for nutrient and sediment management, such as floating wetlands and sediment detention bunds, through to catchment scale tools. In addition a range of social tools aimed at bringing people together and making decisions collectively have been trialled.

Research into the information requirements of stakeholders helped focus communication activities and ensured people received the right information at the right time through the right medium. Living Water developed an integrated communications strategy, and in 2021 the Living Water website was revised to identify completed trials and tools ready to use, and a media releasing programme commenced. By the end of the 2021 financial year, social media followers had quadrupled since 2019.

Engaging with stakeholders is critical because when the partnership ends in 2023, ensuring a successful handover of lessons will be important for both DOC and Fonterra, stakeholders and the wider community concerned about improving the quality of freshwater in New Zealand. The successful transfer of everything that’s been learned will be the enduring legacy of the Living Water partnership. 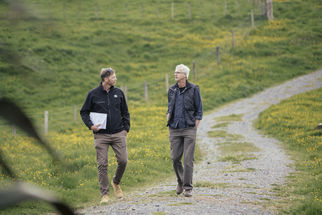