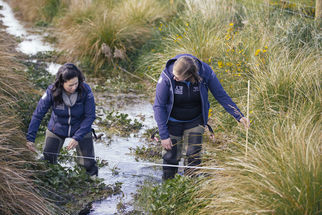 WHAT IS THE PROBLEM?

University of Canterbury’s Freshwater Ecology Research Group (CAREX)'s two years of research showed excessive fine sediment and high nitrate-nitrogen present in waterways in the Ararira-LII catchment. Both contaminants (in high levels) are damaging to the freshwater environment. The catchment is made up of a network of small, rural waterways that are classified as "drains" with the primary focus of draining water away from the land. These long, straight, steep banked waterways provide no natural filtration for water running off the land, are prone to flooding and bank collapse, and are periodically cleared by diggers, these degrade habitat and contribute to the high nitrate-nitrogen and sediment loads.

A very important factor that needs to be considered in the management of these waterways is that these smaller, spring-fed drains now make up most of the available habitat for our threatened freshwater fish species like inanga, upland and common bullies and longfin and shortfin tuna/eels. It's important they are managed to benefit ecology as well as drainage. Two-stage channels can help with this by providing flood protection and when planted act as a natural filtration for run-off, helping to reduce sediment and nitrates and when planted provide habitat and food sources for freshwater fish.

WHAT IS THE PROJECT?

In August 2020 Living Water installed an instream sediment trap, two-stage channel and woodchip bioreactor. The purpose of the two-stage channel is to reduce sediment and nitrate-nitrogen during times of high flow while keeping the surrounding farmland from being flooded.

The 720m two-stage channel was created by modifying the banks on either side of the waterway to resemble floodplains, see the diagram below. When the waterway receives higher flows they will flood and slow water allowing sediment to drop out. As the floodwater subsides, water will pool on the floodplain and denitrification will naturally occur. Both floodplains were planted with native sedges (see below for information on which sedges were used) which can tolerate wet soils and periodic inundation to provide shading, trap more sediment and increase denitrification.

How much does it cost?

The native sedges purei or pukio (Carex secta) and rautahi (Carex geminata) were planted at 1.5m spacings on the benches and banks. Pukio, a large sedge up to 1.5m tall, was chosen to stabilize the banks and benches and provide shade to the waterway which substantially reduces excessive aquatic weeds. Rautahi is a lower growing rhizomatous sedge (spreads by sub-surface stems) ideally suited to colonize the two-stage benches and trap sediment and absorb nutrients. The two rows of pukio which were planted on the two-stage benches closest to the channel were a large grade plant chosen for faster establishment and shading and their ability to withstand inundation more successfully than smaller restoration grade plants.

What did Living Water learn from this trial?

Since installation in 2021 there haven't been significant flows in this waterway so we don't yet know its flood capacity.

Monthly monitoring since June 2021 does show a gradual decline in nitrate-nitrogen of 15.8 mg/litre in June to just over 9 mg/litre in November this drop cannot specifically be attributed to the effect of the bioreactor as the upstream and downstream samples for each sampling round had similar levels of nitrate-nitrogen. This decline is likely to be a natural drop in nitrate-nitrogen evident throughout the Spring period when the springs are active on the farm.

In theory, the two-stage channel should involve no maintenance for decades.

Head over to the Bioreactor project page to read the reasons why the bioreactor, two-stage channel and sediment trap isn't performing as hoped.

WHO COULD USE THIS INFORMATION?

LINKS TO OTHER RESOURCES