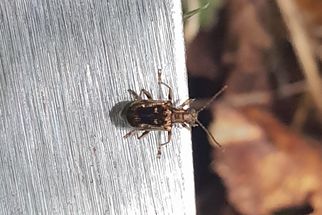 What is the problem?

The weed Tradescantia (Tradescantia fluminensis also known as Wandering Willie) is a significant problem in Northland and causes significant damage in natural areas by smothering native seedlings and preventing bush regeneration. The weed is currently managed on farmland by grazing stock often on land near waterways, wetlands and in natural bush/forest areas. Allowing stock to graze these areas means in addition to eating the Tradescantia, native seedlings are eaten or trampled, which also results in nutrients and sediment entering waterways.

What was the purpose of this project?

How was the project undertaken?

The three-year trial began in February 2016 at sites within the Hikurangi Floodplain of the Wairua River to compare two different approaches to management of Tradescantia, namely three biocontrol beetle species (released as a trio), which target different parts of the plant, and hand clearing. The beetles (Neolema ogloblini which feeds on the leaf, Lema basicostata which eats the stem, and Neolema abbreviate which feeds on the tip) were sourced from Brazil and were approved for release by the Environmental Risk Management Authority (ERMA) following host-range testing that indicated they were safe to release in New Zealand. These species had previously been released separately in New Zealand. The Hikurangi trial was the first release of the beetle species as a trio. Vegetation, environmental, and invertebrate data were collected during the experiment and at final harvest of Tradescantia biomass in late February 2019.

What was achieved by the trial/what did Living Water learn?

Initial results showed beetle larvae were stripping Tradescantia leaves bare and remaining leaves were being well-chewed by adult beetles. Findings from a survey in February 2019, contained in a final report, indicated a healthy population of beetles probably due to the warm dry summer weather. Results showed the biocontrol beetles, after a slow start, were effective in reducing Tradescantia and promoting regeneration of native vegetation, although the trial needs to continue for several years before noticeable ecological benefits are seen. The report includes guidelines on collecting and establishing populations of these biocontrol beetles, available for dissemination to other sites in the wider district, in the hope other people will want to control this invasive weed.

Where is more information available about Tradescantia?